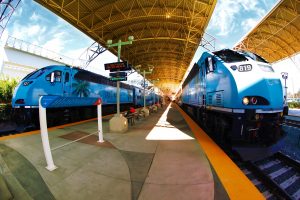 Developers and community leaders see this as an opportunity to build commuter-friendly station areas that are vibrant mixed-use centers with shops and restaurants as well as housing and office space.  Currently, Brightline/Virgin Trains, the private sector service, runs from downtown Miami to downtown Fort Lauderdale to downtown West Palm Beach.  Three new stops will be added by the end of this year in Port Miami, Aventura and Boca Raton.  Tri-Rail, which is publicly funded, runs service along the South Florida Rail Corridor, which connects the major airports with plans to connect to downtown Miami in the near future.

Many municipalities are vying for position to have a stop in their community to be part of the future of transit and increased development from jobs to services resulting in healthy economic growth.

The South Florida Regional Planning Council is working with partner agencies and local governments to create a land development climate that encourages vibrant centers around stations.

The SFRPC is a public policy agency providing state and local policymakers with the information they need to build South Floridians a better future.  Our geographic areas of responsibility encompass Broward County, Miami-Dade County, and Monroe County, and all of their municipalities.