Coral reefs in Florida and throughout the United States and its territories are critically threatened due to increasing global and local stressors. In particular, the Florida Reef Tract, North America’s only coral barrier reef, is currently facing an unprecedented coral disease outbreak. 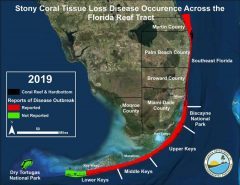 The Florida Reef Tract (FRT) stretches from St. Lucie Inlet south to the Dry Tortugas and is 360 miles long. The reef remains an important part of Florida’s ecology and economy. The coastal portions of the reef supports diverse marine habitats, more than 71,000 jobs and contribute to $6 billion to Florida’s economy while serving six million residents and over 38 million tourists.

New federal legislation called the Restoring Resilient Reefs Act of 2019 was introduced before Congress’ August recess.  The bill sponsored in the U.S. Senate by Senators Marco Rubio, Rick Scott, Brian Schatz and Mazie Hirono and in the House by Darren Soto and Jennifer Gonzalez-Colon is expected to be discussed this fall.

The Tampa Aquarium announced its most recent scientific break though on coral reef restoration through Project Coral, a program designed to repopulate the Florida Reef Tract.  Scientists say that a group of coral reproduced two days in a row in a lab setting.  This milestone provides hope for repopulation.  The Tampa Aquarium plans to build greenhouses and expand their scientific operation.

Other efforts include creating a coral reef restoration plot along the coast of Key Biscayne.  The Miami Super Bowl Host Committee has partnered with the University of Miami’s Rosenstiel School of Marine and Atmospheric Sciences, the Frost Museum of Science, and Verizon to build an enhanced coral reef adjacent to the Rainbow Reef.