Every American suburb has them. They feature fast-moving traffic, congested intersections, low density, and quite often lower-end real estate development. Pedestrians, cyclists, and transit riders cross them at their own risk.

Dotted by strip malls, fast-food outlets, and car dealerships, auto-oriented commercial corridors and suburban arterials are among the unhealthiest places in the built environment. They not only discourage active and sustainable modes of transport like walking, cycling, and mass transit, but many also bifurcate communities, isolating neighborhoods from one another and segregating land uses as well as people.

ULI’s Building Healthy Places Initiative and the ULI Rose Center for Public Leadership are taking a closer look at commercial strips and their potential to activate healthy behaviors in surrounding communities instead of inhibiting them. Through demonstration corridors in four geographically diverse and growing cities—Boise, Denver, Los Angeles, and Nashville—the healthy corridors project aims to spur real changes in infrastructure, policy, and programming along these sites. In addition, the project’s goal is to develop a typology, or model, of a holistically healthy corridor that can be replicated in communities throughout the world. 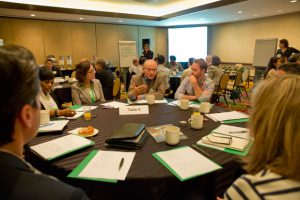 ULI Los Angeles, ULI Idaho, ULI Nashville, and ULI Colorado were selected through a competitive application process to participate in the project, supported by the Robert Wood Johnson Foundation and the Colorado Health Foundation.

At the 2015 ULI Spring Meeting in Houston, Institute members from these councils met together for the first time during a half-day forum, where they discussed the potential assets and present-day challenges of each demonstration site as well as of commercial corridors generally. Also providing insight were alumni from the ULI Rose Fellowship program, in which commercial corridors have surfaced as a major topic of concern for public and private sector leaders. In addition, a national working group of leaders in the fields of public health, transportation planning, real estate development, and urban design was on hand to offer feedback and will continue to advise the four groups representing the demonstration sites.