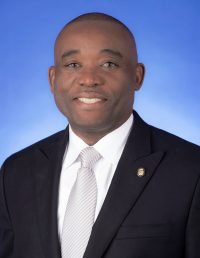 Committed to public service and the gift of service to others, Commissioner Monestime was first elected in 2010 to represent District 2 on the Miami-Dade Board of County Commissioners serving portions of the City of Miami, North Miami, North Miami beach, Opa-locka, and the unincorporated areas of Liberty City, Biscayne Gardens and North Central Dade.

In 2014 he was re-elected and selected to serve as Chairman of the Miami-Dade Board of County Commissioners for two years. Municipal, school board, and commission colleagues chose Commissioner Monestime in 2015 to preside over the Miami-Dade Metropolitan Planning Organization (MPO) Governing Board.  Other public service includes serving as a Councilman and Vice-Mayor in the City of North Miami, a delegate to the National Democratic Convention and Florida Electoral College Member for the 2012 U.S. Presidential election.

Prior to public office, Commissioner Monestime was a former Miami-Dade County Public School teacher and adjunct professor of management at the University of Phoenix, South Florida campus.  Currently, he is the president of a real estate and insurance company, and a business consulting agency.

Commissioner Monestime advocates for equal justice and economic development.  He intends to bring his passions as a 30-year resident of Miami-Dade County and public servant to the SFRPC.

The SFRPC is a public policy agency providing state and local policymakers with the information they need to build South Floridians a better future.  The South Florida region is comprised of Monroe, Miami-Dade, and Broward counties. For additional information about the Council, please visit www.sfregionalcouncil.org